Before GMOs there were Atomic Seeds and Muriel Howorth

- February 06, 2013
Muriel Howorth, founder of the Atomic Gardening Society, was a woman we wish we had personally known. Now we know about her because of the efforts of the author of the blog, "Garden History Girl".

You can enjoy the most recent post at
http://gardenhistorygirl.blogspot.com/2013/02/more-on-atomic-gardens.html

Howorth is the subject of a new article in the British Journal of the History of Science that you can read at
https://docs.google.com/file/d/0B2mfa2lmy9ZERnVhU3hSbm1LUUk/edit?usp=sharing
with the compliments of the Journal and the author, Paige Johnson (nanotechnology researcher at the University of Tulsa).

Johnson's earlier writing about Howorth can be read at
http://gardenhistorygirl.blogspot.com/2010/12/atomic-gardens.html 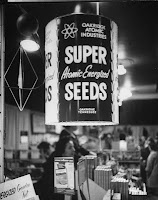 Another article was written about atomic seeds last year, "Strange and Beautiful Seeds from the Atom" by Nicola Twilley in the online blog Edible Geography at
http://www.ediblegeography.com/strange-and-beautiful-seeds-from-the-atom/

In Johnson's 2010 blog entry you see how this unusual pursuit was born:
"The Atomic Gardens grew out of post-WWII efforts to use the colossal energy of the atom for peaceful pursuits in medicine, biology, and agriculture. 'Gamma Gardens’ at national laboratories in the US as well as continental Europe and the USSR bombarded plants with radiation in hopes of producing mutated varieties of larger peanuts, disease resistant wheat, more sugary sugar maples, and African violets with three heads and a singular atomic entrepreneur named C.J. Speas irradiated seeds on his Tennessee farm and sold them to schoolchildren and housewives, among them Mrs. Muriel Howorth. "

In an interview with Alexander Trevi that appears in "Pruned" Johnson says the "Atomic Gardens is particularly compelling for its citizen science component, as well as its potential to offer a historical perspective on the inflated claims of GM-boosters today.

As she points out, “It’s clear from reading the primary sources that most people involved were deeply sincere. They really thought their efforts would eradicate hunger, end famine, prevent another war.” These are eerily similar claims to those we hear from the Gates Foundation, for example, as they pour millions into the development and propagation of transgenic Golden Rice and BioCassava Plus.

If you aren't sure what this all has to do with you, the New York Times reported, "most of the global production of mint oil,” with an annual market value estimated at $930 million, is extracted from the “wilt-resistant ‘Todd’s Mitcham’ cultivar, a product of thermal neutron irradiation.” She adds that “the exact nature of the genetic changes that cause it to be wilt-resistant remain unknown.”