- December 31, 2012
Black Soldier Flies are popular with home-composters and organic gardeners in USDA zones 6 and above. If you don't have the larvae in your compost yet, it might be worth finding out about them, how to attract them and how to feed them so they stay around.

The Black Soldier Fly blog at http://blacksoldierflyblog.com provides plenty of information  that is easy to read. It's the larvae that eat compost and any harmful insects in your bin. If you aren't squeamish, check out this YouTube video of the larvae mowing through cucumbers.

They seem to prefer coffee grounds and those are readily available from your local coffee house. They are tan and ridged as in the photo below. 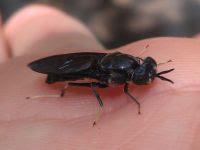 The U FL Featured Creature says, "The black soldier fly, Hermetia illucens (Linnaeus), is a sleek looking fly that many confuse with a wasp. However, like most flies, the black soldier flies only have two wings (wasps have four) and does not possess a stinger. Although the loud buzzing they create when flying is enough to concern many people, adult soldier flies pose no danger.

So! We rarely see the adults because they do not eat during their 5 to 8 day life. They breed and die. As you can see from the photo they resemble small wasps. Unlike houseflies they are not disease carriers.
In that short lifetime, a female can lay up to 900 eggs.

At the Bipod,
"The average egg case includes approx. 400-600 eggs; the tiny 1 mm eggs hatch in a little over 100 hours. If environmental conditions are favorable and there is adequate food, the cream colored larvae can reach full maturity in 2-4 weeks. This period may be extended to several months if temperature and nourishment are less than optimal. The tough and leathery chitin-skinned juveniles pass through 6 stages of growth called instars. The last of the instars is distinguishable by a color change from cream to dark gray-brown. The pupae develops within the protective, darker-colored skin of the 6th larval instar, which is referred to as the puparium. Larvae over winter in a sheltered dry location, with pupae development slowing considerably during the coldest months. Depending on a multitude of environmental triggers, pupation occurs irregularly throughout spring and summer, so that the emergence of adults is spread out over an extended time period. There are approx. 2500-2550 mature grubs per pound."

To provide a place for the females to lay eggs, add corrugated cardboard to your insect habitat, compost pile or line a bucket with it.

The claim to fame for the larvae is that they will eat through a compost pile in 3 days.

If you prefer a more complex approach, go to The Walden Effect to see what they built at a school in Virginia.

Either way, encourage them to come and stick around your compost bin. They do lots of good and no harm.

Unknown said…
Thank you so so so much for this informative post. We had a ton of these in our compost bin last growing season and had no clue what they were. There were so many, the sound of their writing bodies could be heard through the sides of the bin. I noticed that composting went much faster when they were present, but we weren't sure if they were a sign of healthy compost or not. Thanks to your informative post, we'll welcome larvae we find in the spring!
January 3, 2013 at 5:23 PM

Molly Day said…
Hi Amanda - I konw exactly what you mean. Last summer there were what looked like thousands of them in my worm compost bins and I sort of freaked - afraid they were houseflies.
I put on gloves and scooped hundreds of them over to the bird houses where baby birds were screaming for their parents to feed them.
Next year I'll at least know what they are!
January 6, 2013 at 9:50 AM