Bees - Don't Know Much About 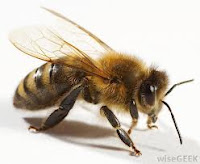 The question was "How do bees choose their queen?"

The answers came from knowledgeable bee people and you'll learn something!

Just made requesting me to answer Quora questions free (because expertise should be free), so keep them coming!

They don't: the queen chooses the bees.


Here's how it works: a bee hive / ant colony starts with a winged queen, who digs a nest, sheds her wings (if she's an ant), and begins to lay eggs. They start as workers (all female), whom are kept from becoming reproductive by chemicals the queen produces that stunt the development of other workers.
At her will and once the colony is large enough, she will produce eggs destined to become reproductives: princesses and princes. These are often fed different food and develop for longer.
Royal jelly, for example, is fed to the bee larvae destined to become reproductives. I should also point out that bees and ants can choose the gender of their offspring: unfertilized eggs become male, and queens, which store sperm in special organs in their body, selectively fertilize or not fertilize each egg.

During mating season, the reproductives fly out of the nest and mate in the air. Males die, and the mated females go off to become new queens and start brand new nests.

What happens if an extant queen dies? Sometimes the colony dies with her. At other times, a worker or several workers actually start to lay eggs and one eventually takes over as queen, usually by killing other egg-laying workers. Sometimes rebel workers lay eggs while the old queen is alive, but the latter will eat them before they hatch.


What you are describing is indeed how ant queens establish new colonies, as well as many species of bees. To the best of my knowledge, it is not how honey bee colonies are created though. I am not an entomologist, just a beekeeper, but I don't think a honeybee queen can raise brood on its own - it would need workers for that, which is why a new honeybee colony is not founded by a solitary mated queen but rather by a swarm.
Tal Reichert, Hobbyist beekeeper and incurably curious.Hobbyist beekeeper and incurably curious.

To supplement Matan's answer, which is more generic to non-honeybee-species, I wanted to describe the process regarding honeybees.

Normally, a honeybee colony has a single, mature queen in it. That queen actively lays eggs, worker bees tend to the larvae hatching out of the eggs until they seal the cell these larva are in and let them transform into an adult bee.

There are three types of honeybees - drones (males) that hatch out of unfertilized eggs, and workers+queens, both of which are females and come out of fertilized eggs. What separates the workers from the queens is the way they are raised - and here's the explanation.
There are three situations in which bees "decide" to raise a new queen.

1. When they feel their existing queen is getting old/failing, and they want to supersede her with a new queen.
2. When the queen has gone missing - died, wandered off the hive, whatever - but she's not in the hive.
3. The bees "decide" to swarm, i.e. take one hive and split it into two.

In all of these situations the bees need a new queen. They choose female eggs (apparently at random) and relocate them into bigger cells ("queen cells"). These female larvae are fed richer food than the worker larvae (to be specific - in the first three days of their lives, worker larvae and queen larvae are both fed the rich royal jelly, but only queen larvae are kept on it, allowing them to mature faster and become queens). The cells are then capped, the larvae create pupae and transforms into queens.

The first virgin queen to emerge communicates with the other ones through piping - they create vibrations in the comb. The roaming virgin queen creates a sound called "tooting", its sisters answer it with "quacking". The free-roaming queen then goes cell-by-cell and kills them all.

What's next for the newbee queen is a bit of maturing in the hive for a few days, some practice flights to learn the hive's location, and then a flight to the nearest drone congregation area for the queen's only romantic adventure of her life, in which she'll mate with multiple drones from other hives - these drones will die on the spot.

Upon returning to the hive, what happens next varies by the reason the queen was created in the first place.

If the old queen went missing or dead, then now the bees have a new queen and a reason to celebrate - the hive was saved (no queen - the colony's days are numbered. As mentioned in one of the comments, when a virgin queen is around or when no queen is around, worker bees might start laying eggs, but as they have not mated, these will all be drone eggs. Male bees, much like human males, aren't good for much).

I guess the bottom line for your question - how do they choose a queen - the answer is "rather randomly".
Honeybees raise new queen in 3 situations:
1. swarming
2. supersedure
3. emergence
In every case they start multiple queen cells. That increases chances of survival of a queen in case something happens to another one for example during mating flight. At the end if hive has two queens, they will fight and strongest one wins.

So I belive bees do not choose there queen, they let the nature pick the best one.

NPR "Wild Bees Are Good For Crops, But Crops Are Bad For Bees"