- March 08, 2018
The Arkansas Native Plant Society sends a monthly email to subscribers who are interested in native plants. Downy Serviceberry was the topic of the Feb 28 2018 newsletter. At the link, look right and you'll see the sign-up box. I read 80% of them since I'm always on the lookout for an education on native plants for our area and ONPS doesn't have anything like this.

With branching and suckers they reach 15 by 15 feet in part-shade. Fall color and scented flowers. Bird habitat. 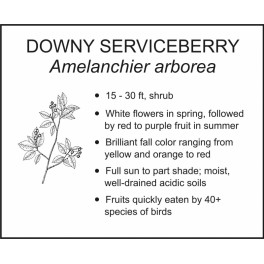 "Downy serviceberry, a deciduous tree to large shrub (referred to as “tree” herein), tends to have several trunks of varying size and, when younger, may sprout nearby suckers.
Mature trees in full sun have a thickly branched, rounded crown, while those in shadier understories tend to be tall with irregular branching. An average size large tree is 15 to 25 feet tall (state champion tree is 44 feet tall).
Branches tend to diverge from the parent branch at a sharp upward angle. Spring twigs, green and covered with long white hairs, grow from previous year’s brown to purplish, glabrous stems. Older twigs are smooth with white lenticels scattered about the ash-gray slender branches. Younger portions of trunks are smooth with splotches of grays and whites on a light gray background. Older trunks are a dark gray with shallow fissures."

"Downy serviceberry is the most widespread species of the genus in North America, found throughout the eastern U.S. from Texas to Minnesota and thence east and south to the Atlantic and Gulf coasts. Common names include common serviceberry, sarvisberry, sarvis, shadbush and Juneberry.

Habitats of downy serviceberry include dry to mesic, well-drained ,upland woodlands and forests, in full to partial sun light. It is especially common on ridgetops and rocky slopes. It often occurs as an understory tree among various hardwoods and pine. Downy serviceberry readily hybridizes with other Amelanchier species where ranges overlap.
Easy to grow but is not reliable under high stress conditions.  No serious disease problems; occasional insect problems.  Root suckers need to be removed to avoid a shrubby growth.  Rarely requires pruning.

This species is often sold in the nursery trade as Amelanchier canadensis which is in fact a separate species.  Many cultivars are available commercially.

TN Nursery sells them 5 for $43. For free shipping enter the code FREESHIP