Hypericum is St. Johnswort and now there are well-behaved hybrids

- May 23, 2012
The most familiar Hypericum is St. Johnswort, which has become a popular herbal remedy for stomach ailments, nerves and sleeplessness.
It is a European native, used by ancient Greeks and Romans to keep evil spirits away. The name comes from St. John the Baptist whose birthday is June 24, about the same time St. Johnswort is showing off its bright yellow flowers.
Last year, Green Leaf Plants (www.glplants.com) released four new Hypericums in a group they call Hypearls: Hypericum Jacqueline, Hypericum Jessica, Hypericum Olivia and Hypericum Renu.
Since they enjoy part-shade, ours were planted in a dappled shade area two years ago and this year they are growing quickly and blooming. As with most perennial shrubs, these took their sweet time becoming established but now look like they are going to fill in all the allotted space.
St. Johnswort loves heat and shrugs off our humidity, prefers well-drained soil, and is cold hardy to zone 6.
The new varieties: Jacqueline is 2-feet tall and has yellow-orange berries that mature to deep red. Jessica is a little smaller with cream-colored berries. Olivia will grow up to 3-feet tall with yellow berries that turn salmon-pink. Renu’s berries start out cream and turn bright pink. Its new growth also has a red tint.
All of them would succeed in a part-shade area of the garden or in a container. The 1-inch flowers and colorful berries grow on new wood, so prune in late winter in order to shape the plants, allowing plenty of time for new growth. Flowering continues into the fall.
Hypericums are easy to grow and require minimal care though all the varieties are known for their afternoon wilting.
Common St. Johnswort, Hypericum perforatum, is a shrubby perennial for sun or part-sun and is recommended for stabilizing hillsides because it will spread to form a dense weed-proof planting. It is cold hardy to zone 5. To use it as a groundcover or among shrubs and trees, use 5 plants per square yard.


St. Johnswort is deer and rabbit resistant because the stems and leaves contain hypericin which is an irritant to their stomachs. Bees and Syrphid flies take the nectar but there is little pollen for butterflies. The leaves are eaten by insects such as beetles, Gray Hairstreak butterfly caterpillars (Strymon melinus) and several moth caterpillars such as the Wavy-Lined Emerald and Treble-Bar.
The flowers have been used to make yellow dye and the stems are used to make red dye.
To harvest the leaves for herb tea, cut a third of the flowering stems when their flowers are open. Hang the stems upside down in a cool, dark place. Use the dried leaves within a year for maximum benefit.
There are over 400 plants in the Hypericaceae or Clusiacheae family, including shrubs, trees, annuals and perennials all over the world, growing in most areas from scrub to mountain cliffs. 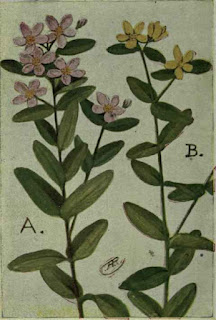 To grow St. Johnswort (Hypericum perforatum) from seed, sow seeds in fall or early spring. Seeds take 30-days to germinate. Since the seeds are tiny, they should be sown on the surface of sterile soil indoors. (500 seeds $3 at Horizon Herbs, www.horizonherbs.com).
Common, seed grown St. Johnswort, Klamath weed, common goatweed, gold flower, or tipton weed, is on the invasive plant list in several states. The hybrids are less likely to become a problem in the garden. Some varieties are not cold hardy here so read the catalog or plant tag.
The name Hypericum is Greek for ‘over an apparition’, referring to the belief that Hypericum was such an obnoxious weed that it would cause evil spirits to fly if they breathed in its scent.
deer resistant plants goatweed gold flower Green Leaf Plants hybrid Hypericum Hypearls Hypericum Klamath weed St. Johnswort tipton weed

Donna said…
I like SJW and once planted it in a client's huge garden. And guess what? It was a very happy and invasive SJW. They made me remove it after a couple of years. Happy to hear there are more controllable varieties.
May 25, 2012 at 7:24 PM

Molly said…
Hi Donna -
I guess I should be happy that my previous attempts to grow SJW failed and that this hybrid is doing so beautifully.

When trial plants arrive, I'm always excited but usually wait a couple of years to see how they do before telling others about them.

If they look good in our 3-acre mess, in crazy Oklahoma weather, after that length of time, they are bound to do well in others' gardens.