- August 17, 2011
The appearance of Naked Ladies is a bright spot in the garden at this time of year. 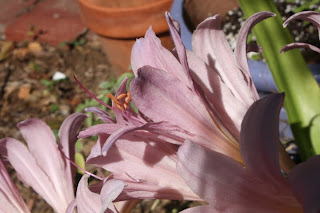 They are both great pass-along plants though most gardeners and plant retailers do not know the difference between them.

You will soon be able to discover which one of these plant cousins you have in the garden because Lycoris squamigera has leaves only in the spring and Amaryllis belladonna makes leaves immediately after flowering.

The plant genus Lycoris, which includes Red Spider Lilies (Lycoris Radiata), was named for the Roman actress and her slave lover who were involved in the assassination of Julius Caesar. So the name Naked Lady could refer to more than the bare stems emerging leafless from the ground and producing scented pink to lavender flowers. 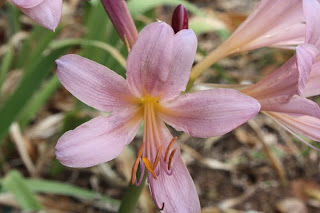 Lycoris bulbs make offsets or small new bulbs around the base of the mother bulb, forming clumps that should be divided and transplanted when they are crowded.

After Amaryllis Belladonna flowers die, the leaves appear and die again in the winter. Then, in the spring they reappear to grow a significant number of lily-like leaves to store food for the next summer’s flowers. This type of growth is called hysteranthy. 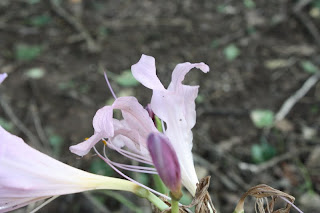 Dr. Shejbal, who works with Floriana Bulbose, said the “name comes from the Italian bella donna which means beautiful woman. The name was the object of a lot of controversy between botanists because of an error made by Linnaeus in 1753, who mixed up the Amaryllis from South Africa, known in Italy and Europe for centuries, with the amaryllids from the New World, that were classified as Hippeastrum in the early 19th century. But they are still known to many in the florist and nursery trades as Amaryllis.”

If you want to know precisely which you have, Jason Delaney, North Gardens Supervisor and Bulb Collections Specialist, at the Missouri Botanical Garden described the difference in an email.

“Amaryllis belladonna is not hardy north of the deep south and the west coast areas, so bulbs grown in the north would be Lycoris. Well grown Lycoris bulbs are often the size of a large apple, somewhat ovoid in shape with long, finger-like necks. They have flaky, papery tunics of deep coffee-to-greyish-brown. If you cut into a bulb, they are very succulent and milky white inside, and they almost always have a set of greenish leaves tucked in the middle, for the following growing season. Amaryllis belladonna bulbs are mango-sized, with very short and reduced or blunt necks with tunics of kraft-paper brown or paler with darker brown corduroy-like lines; if you try to pull the tunics apart, the natural latex in the tunic walls create hundreds of hair-like, stringy fibers  or web-like material. It is very distinct and a terrific natural protection mechanism for the bulb when it grows in the wild.”

When shopping for Naked Lady bulbs, pay attention to hardiness zones and look at the plant photo. You will not necessarily get the correct plant by name. The flowering tropical house plants we know as Amaryllis are actually Hipeastrums.
Lycoris Lycoris squamigera or Amaryllis belladonna

Propagating by stem cuttings is just about the easiest way to make more begonias for next summer's garden. During the fall, I regularly trim off 3-node long cuttings and put them into the growing pots where they take root.

Now that cold weather has arrived, I root the stem cuttings in a vase of water. It's a great way to produce more pots of Begonias for next summer's garden.

Water the plant well the day before.

Take a cutting about 4-inches long, with 3 nodes, from a healthy stem.

Use a perfectly clean container. Rinse the container with a drop of bleach if you are uncertain about its spotlessness.

Remove all but the top leaf or two. There should be no leaves in the water.

The cutting should  have a healthy leaf node at the bottom. Don't leave a stub below the node. Place the cutting into the water, and place the container out of the sun. In a couple of weeks, you will see new roots beginning to form.
Check the water periodically to make sure it is still fresh. If it…
Read more

Moldy tulip bulbs are a big disappointment when you are hoping to fill a bed or some pots.

It is not that unusual for their skins to have a bit of penicillin mold but these are beyond that tad bit stage.

So, what to do? The plant references say to throw them out and buy new ones but I already spent $22 for 50 of these white tulip beauties.

First, they got a soak in 1% bleach solution in the kitchen sink in the hope that the bleach would stop the mold from continuing to grow without killing the life force in the bulb itself. After a good slosh around, I wiped them off to see how much damage was beneath the blue and black.

This tulip bulb is soft to the touch and there is little chance it will thrive in the soil.
This basal root on these have been ruined by mold. The final step I took to try to salvage part of them  was to spray them thoroughly with fungicide.

They are all planted in the garden now though some of them will probably not do well. In particular, the ones that the mold tu…
Read more

Marilyn Stewart of Wild Things Nursery in Seminole is enthusiastic about the value of native plants for home and public gardens.

When I look at my garden and see a flower without an insect on it, I feel like I have failed, Stewart said. If you care about birds you have to plant the natives that support insects so birds can raise their young in your garden. Only finches can feed their babies with seeds.

Stewart is bringing both native plants and terrariums of Oklahoma native butterfly caterpillars to her talk in Muskogee on Sept. 17.

People have a prejudice against native plants, Stewart said. They think they are messy or look straggly. The truth is that you can do anything with natives that you can do with hybrids. The difference is that the natives will live through our weather and in our soils.