- December 22, 2011
According to tradition, the Three Wise Men or Magi brought gold, frankincense and myrrh to the Christ child.  Gold is a symbol of divinity, the smoke of burning frankincense carried prayers to heaven, and myrrh was used as a holy ointment.


Myrrh and frankincense are the sap of small shrubs that grow in the Middle East and Africa. They do not actually burn, but smolder when heated.

Frankincense, Boswellia sacra, is harvested by cutting into the tree bark and allowing the sap to flow out. The sap was burned to create a pleasant smell during religious services so it became associated with holiness. Today, Catholic priests bless the congregation with the smoke from a Thurible, swinging from a chain.


Myrrh’s native habitat is Arabia. Its Latin name is Balsamodendron Myrrha or Commiphora myrrha, also known as Gum Myrrh Tree. Both Frankincense and Myrrh are members of the Burseraceae plant family. 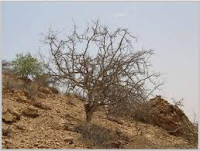 Gum Myrrh trees grow to 9-feet tall with knotted branches that end in sharp spines. Ducts in the bark and tissue break down and form cavities that fill with the gold-colored, gummy secretion. As it hardens, myrrh gum becomes red-brown chunks.


Herodotus (5th century BC) wrote, "Arabia is the only country which produces frankincense, myrrh, cassia and cinnamon...the trees bearing the frankincense are guarded by winged serpents of small size and various colors."


In the first century BC, Diodorus Siculus wrote, "all of Arabia exudes a most delicate fragrance; even the seamen passing by Arabia can smell the strong fragrance that gives health and vigor."


Today, even though only a few tons are produced each year, the beach sand near the original ports still smell like Frankincense.


Throughout the ages, Myrrh has been widely used medicinally both for humans and animals.


Myrrh’s spicy scent made it popular in oils and incense. Its cultural uses include embalming and fumigation, as well as burning it to purify and protect. The Egyptians used it to mummify their dead.
As a medicine, Myrrh was a terrific gift. It acts as an antimicrobial, disinfectant and antiseptic. It is an astringent that reduces discharge, a carminative that eases colic and griping pain, an expectorant to treat respiratory ailments, and an overall tonic that stimulates the stomach, restores gastric juices and invigorates internal organs. Health food stores sell myrrh gum capsules.


Myrrh is often combined with other herbs to make healing tinctures. For example, combined with thyme, it is used to relieve throat infections. You will find it in mouth wash, toothpaste and other dental preparations.


Other products that are widely available combine Goldenseal, Frankincense and Myrrh for skin care in soaps and creams, especially for skin problems such as excema.


Botanically, there are over 100 Myrrh varieties. Today the most popular Turkish gum is harvested primarily from Commiphora myrrha.


Balm of Gilead is harvested from Commiphora gileadensis. Bdellium, Commiphora Africana is used as a fixative in incense.

Middle Eastern Commiphora myrrha was used to treat cancer, leprosy and syphilis in the Greco-Roman world. Traditional Chinese medicine prescribed Myrrh for heart, liver, spleen, blood cleansing, arthritis, and many other ailments. It has long been used as a cleansing solution for wounds and bruises.

To grow a Commiphora shrub, you would have to create a sandy soil planting bed in full sun. Water the plant for a few minutes every other week.

Search for Burseraceae family at these sites.

Dee/reddirtramblings said…
That was so interesting Martha. I loved it. You're such a good writer and researcher.~~Dee
December 28, 2011 at 7:16 AM

Molly said…
Thanks, Dee -
It took tons of research because there is quite a bit of incorrect and non information in books and on the web.
Glad you enjoyed it as much as I enjoyed learning.
January 2, 2012 at 10:28 AM

Propagating by stem cuttings is just about the easiest way to make more begonias for next summer's garden. During the fall, I regularly trim off 3-node long cuttings and put them into the growing pots where they take root.

Now that cold weather has arrived, I root the stem cuttings in a vase of water. It's a great way to produce more pots of Begonias for next summer's garden.

Water the plant well the day before.

Take a cutting about 4-inches long, with 3 nodes, from a healthy stem.

Use a perfectly clean container. Rinse the container with a drop of bleach if you are uncertain about its spotlessness.

Remove all but the top leaf or two. There should be no leaves in the water.

The cutting should  have a healthy leaf node at the bottom. Don't leave a stub below the node. Place the cutting into the water, and place the container out of the sun. In a couple of weeks, you will see new roots beginning to form.
Check the water periodically to make sure it is still fresh. If it…
Read more

Moldy tulip bulbs are a big disappointment when you are hoping to fill a bed or some pots.

It is not that unusual for their skins to have a bit of penicillin mold but these are beyond that tad bit stage.

So, what to do? The plant references say to throw them out and buy new ones but I already spent $22 for 50 of these white tulip beauties.

First, they got a soak in 1% bleach solution in the kitchen sink in the hope that the bleach would stop the mold from continuing to grow without killing the life force in the bulb itself. After a good slosh around, I wiped them off to see how much damage was beneath the blue and black.

This tulip bulb is soft to the touch and there is little chance it will thrive in the soil.
This basal root on these have been ruined by mold. The final step I took to try to salvage part of them  was to spray them thoroughly with fungicide.

They are all planted in the garden now though some of them will probably not do well. In particular, the ones that the mold tu…
Read more 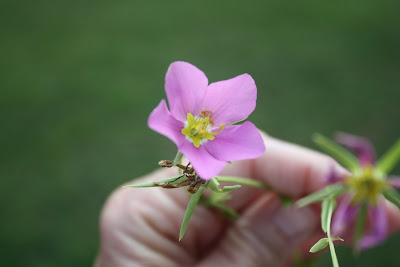 This pretty pink flower grows in a cluster to about 6 inches tall before it becomes prostrate and starts to look like it is creeping along like a phlox.
Its distribution is Wisconsin in the west to southern Ontario and New York in the east, southward to Florida and Texas according to http://www.nearctica.com/flowers/dtoh/gentian/Sangul.htm.

Rose Pink is a biennial, also known as Marsh Pink and Bitterbloom according to http://2bnthewild.com/plants/H361.htm.


Other wildflower sites I found useful when clicking around to identify Rose Pink
http://www.biosurvey.ou.edu/okwild/toc.html