- August 05, 2012
The American Prairie Reserve will be a 5,000 square mile sanctuary for bison, elk , bighorn sheep and wolves when Sean Gerrity's dreams come true. The 500,000 acre preserve is adjacent to 3 million acres of public land that is currently leased for grazing.

So far, Gerrity has succeeded in putting 250 bison on 60,000 acres.
His list of contributors and supporters is impressive.


A transcript of his interview with Yale Environment 360 is available at this link.

One funny comment Gerrity made - when 360 science writer Hillary Rosner asked him if he were concerned about the land and animals and global warming, he said that 5,800 to 3,800 years ago there was a hot period during which the area was even hotter than global climate change is predicted to make the world and the animals were stronger than now. 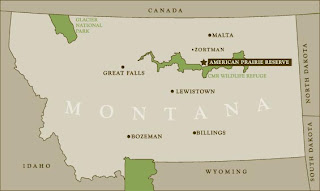 Right now, there is a campground on the site where you can stay for ten bucks but plans include a large luxurious resort. According to American Prairie Reserve's Facebook page, Yellowstone Safari Company is running a trip September 24-28 but I couldn't find it on their page.

Gerrity is a Green Blogger on Huffington Post. Here's his Feb. post. He told the
Montana Sporting Journal that he grew up in Montana and attended college there before moving on to make his fortune and moving home again to help preserve the area.

If this is a topic that interests you, also check out Refuge Watch.