Women and Their Gardens by Catherine Horwood

Brithish writer, Catherine Horwood has several books to her credit: "Worst Fashions: What We Shouldn't Have Worn . . . But Did", "Keeping Up Appearances: Fashion and Class Between the Wars", "Potted History: The Story of Plants in the Home", "Gardening Women", and now "Women and Their Gardens: A History from the Elizabethan Era to Today"
According to the Introduction Horwood, from a family of gardeners, thought she hated gardening as a child. but the difficulty was actually that her mother and aunt talked about gardening as intellectuals. Now she and her mother enjoy walking through their gardens together, talking about plants.

Horwood is a social historian and honorary research fellow at the University of London, a visiting fellow at Yale, the Suffolk representative of the NGS and a gardener in north London. In addition to maintaining a roof garden she is designing a half-acre plot behind her 16th-century house in Suffolk, the former home of artist Caroline Fiennes. 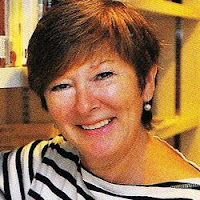 In "Women and Their Gardens" Dr. Horwood traces the stories of women who influenced horticulture and gardening from the 1600s to today.
The chapters are: A Passion for Plants, Shaping the Landscape, Mother Earth, The Floral Arts, Literary Flowerings, and Cultivated Ladies, followed by the academic necessities - 50 or more pages of credits, bibliography, notes and the like.

I enjoyed some chapters a lot and others not as much, but the way the book is organized, it is easy to breeze through some information and read other chapters word for word. It's quite a fun read about England, her gardens and plant lovers as it moves from the plant collectors of the 1600s, through 20th century flower arranging and women's work in growing food during wars.

This is not a how-to gardening book but a social history of gardeners and their gardening. It could also be used as reading for feminist history since Horwood expresses her irritation and disappointments about how women have been treated throughout time. Reminds me of books I read in women's history classes.
Horwood ends her survey of women in horticulture by acknowledging that the glass ceiling has been cracked by Kew. In 1982 they had hired 40 women in a variety of positions.
Since I travel around the U.S. interviewing gardeners, I have met several women in senior positions and have seen many women working in the gardens. Maybe England is behind the U.S. in their attitudes toward women. There are a flood of highly respected, well-known women garden writers all over American book stores, the Internet, on Facebook, etc.
"Women and Their Gardens: A History from the Elizabethan Era to Today" - pick it up for a friend or yourself - many hours of interesting tidbits and stories to read in it.
Ball Publishing, www.ipgbook.com, $27 list and $15 at online retailers. 400-pages, hardback
Women and Their Gardens by Catherine Horwood