Native Plants and Their Relatives 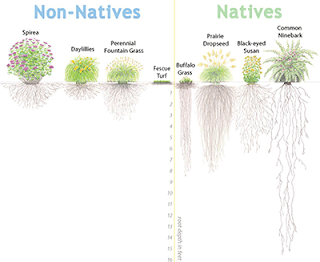 If you watch garden center trends you have noticed that hundreds of hybrids have been developed from native plants.

The claim is that they are just as good for the environment as true native plants but have much nicer features such as form, flower color, size at maturity, disease resistance, etc.

National Wildlife magazine begs to differ from that marketing assertion, pointing out that the clones are really not as good for the environment as we may think.

Click on this link to read the entire article. Excerpts are below.

"Native plants have formed symbiotic relationships with native wildlife over thousands of years, and therefore offer the most sustainable habitat. A plant is considered native if it has occurred naturally in a particular region, ecosystem, or habitat without human introduction.


Exotic plants that evolved in other parts of the world or were
cultivated by humans into forms that don’t exist in nature do not
support wildlife as well as native plants. Occasionally, they can
even escape into the wild and become invasive exotics that destroy natural habitat.
Native plants help the environment the most when planted in places that match their growing requirements. They will thrive in the soils, moisture and weather of your region. That means less supplemental watering, which can be wasteful, and pest problems that require toxic chemicals. Native plants also assist in managing rain water runoff and maintain healthy soil as their root systems are deep and keep soil from being compacted."

After conducting research on the topic, Doug Tallamay commented, "Changes in plant size or “habit,” such as nativars that grow more
compactly or more upright than straight species, “didn’t seem to
make any difference to wildlife,” says Tallamy. Neither did nativars
that are bred for disease resistance such as the Princeton elm.
That’s good news for the American elm  which has been devastated
by Dutch elm disease throughout its native range in the United
States and Canada, and also for the growing number of other
native trees suffering from blights introduced from abroad.
While disease-resistant nativars can be a boon for a plant decimated
by blight, others can have a less salubrious effect on the genetic
health of a species. By definition an atypical plant, a nativar
represents just a sliver of a species’ genetic diversity. What’s more,
to maintain their atypical traits, most nativars are propagated
through cloning, such as by rooting cuttings, which produces
genetically identical plants. When mass produced and overused in
the landscape industry, they result in less genetic diversity than
straight species propagated from seed, and therefore provide native
plants with less capacity to adapt to stresses ranging from disease
to climate change."
“It is a bad idea to load the landscape with plants that have no genetic variability,” says Tallamy. “I’m not a hardliner on this issue, but gardeners ought to have access to straight species. We
have to convince the nursery industry that native plants are about
more than just looks.”