- January 06, 2017
The New Yorker published an exciting article about vertical farming efforts on the east coast.

THE VERTICAL FARM
Growing crops in the city, without soil or natural light.
By Ian Frazier

Ingrid Williams, AeroFarms’ director of human resources, lives in Orange New Jersey but knows Newark well. She has degrees in labor studies and sociology from Rutgers. Williams told me. “There’s an AeroFarms mini-farm growing salad greens in the cafeteria of my daughter’s school, Philip’s Academy Charter School, on Central Avenue. I volunteer there all the time as part of parents’ stewardship, and I know the kids love growing their own lettuce for the salad bar.”

We need more Ed Harwoods in the US with messianic enthusiasm.

"The mini-farm’s inventor, Ed Harwood, of Ithaca, New York, sold it to the school in 2010. Harwood is a sixty-six-year-old man of medium stature who speaks with the kind of rural accent that sometimes drops the last letters of words. He has been an associate professor at Cornell’s famous school of agriculture, and he began his career as an inventor by coming up with revolutionary improvements in the computer management of dairy cows, an animal he loves. His joyous enthusiasm for what he does has an almost messianic quality." 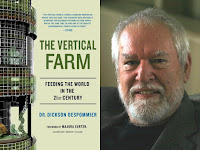 And 76-year old Despommier and his wife are still working to improve the world -
‘What would you like the world to be like in 2050?’ They thought about this and decided that by 2050 the planet will be really crowded, with eight or nine billion people, and they wanted New York City to be able to feed its population entirely on crops grown within its own geographic limit."

Agricultural runoff is the main cause of pollution in the oceans; vertical farms produce no runoff. Outdoor farming consumes seventy per cent of the planet’s freshwater; a vertical farm uses only a small amount of water compared with a regular farm. All over the world, croplands have been degraded or are disappearing. Vertical farming can allow former cropland to go back to nature and reverse the plundering of the earth. Despommier began to give talks and get noticed. He became the original vertical-farming proselytizer." 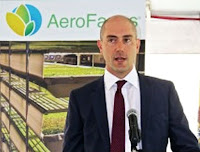 AeroFarms’ CEO David Rosenberg, used his grandfather’s invention to start a business called Hycrete, which he later sold, though not for a sum so great that he has chosen to fund AeroFarms himself. In recent years, his new start-up has raised more than fifty million dollars in investment, about twice as much as has any other vertical farm, or indoor farm of any kind, in the U.S.

Like the original Aero Farms Systems, this company would base itself on Harwood’s patented cloth for growing the plants and on his nozzle for watering and feeding them. It would build the vertical-farm systems but not sell them, grow baby greens commercially, and scale the operation up gigantically. This change in fortunes left Harwood thunderstruck. “I couldn’t believe it,” he said. “How many inventors have inventions sitting around, waiting for a break, and then something like this happens?”

Though many of the hundred-plus employees seem to be diffused throughout the enterprise and most vividly present in cyberspace, everybody gathers sometimes in the headquarters building for a buffet-style lunch, at which Rosenberg makes a short speech. Talking quietly, he repeats a theme: “To succeed, we need to be the best at four things. We need to be the best at plant biology, the best at maintaining our plants’ environment, the best at running our operational system, and the best at getting the farm to function well mechanically. We have to be the best total farmers. And to do all this we need the best data. If the data is not current and completely reliable, we will fail. We must always keep paying close attention to the data.”

Environmental Science Teacher Catkin Flowers keeps it going. "The teacher who keeps all this machinery in good order is Catkin Flowers. That is her real given name. A tall auburn-haired woman in her forties, she starts her science students working with the farm when they’re in kindergarten. “We use the farm to teach chemistry, math, biology,” she explained to me one morning between classes.
“The students learn with it all the way through eighth grade. I think the farm is the reason our science scores are so competitive in the state. We get the kids involved in running the grow cycles and then solving the problems that inevitably come up. That’s how kids really learn, not from sitting back and watching the grownups do everything.”

And, Marion Nestle of Food Politics blog,  is proud to have been mentioned by WikiLeaks as an enemy of the sugary drink industry! What a mensch she is.

"On another morning, I stayed for lunch. First, Mentesana took me, along with Marion Nestle (not Nestlé; she’s no relation), the nutrition expert and N.Y.U. professor, on a tour of the school. A Clinton campaign e-mail released by WikiLeaks the day before had referred to harassment of Nestle by the beverage industry because of her book “Big Soda: Taking on the Soda Industry (and Winning),” and she was in a great mood, proud to have been mentioned.

Robert Wallauer, the school’s young chef, introduced himself. He has worked for famous restaurants, but decided he could contribute more to the public good by running school kitchens. The entrée was a Chinese-style dish of pasta with chopped vegetables. I told him it was so delicious that if this were a restaurant I would come back and bring my friends."
AeroFarm Catkin Flowers David Rosenberg Dr. Dickson Despommier Ed Harwood Food Politics Ian Frazier Ingrid Williams Marion Nestle New Yorker Robert Wallauer Vertical farming