- March 10, 2016
One of the many delights of spring is seeing Jack-In-the-Pulpit plants popping up and showing off their strange beauty. They are perennial plants that bloom in undisturbed woodland areas so you might see them if you go walking in April. 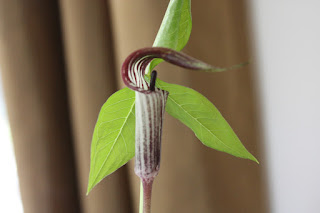 Their Jack-in-the-Pulpit name comes from a time when a preacher in a pulpit was called a Jack. The pulpit is the shape of the spathe that resembles an old fashioned elevated pulpit with a hood over it.

This plant has a flower but it is not the obvious pulpit-shaped leaf. The tiny flowers are down at the bottom of that tube.

The Latin family name for Jack and his close relatives is Arisaema and one of them is native to our region. They thrive in moist, acidic soil where hard wood trees grow. When the flowers mature, woodland animals usually eat them before they can fall onto the ground and create more plants.

Arisaema triphyllum has a bright green and purple striped pulpit. One of the common names for it is Indian Turnip. The part of the plant referred to as the turnip is an enlargement (a corm actually) at the base of the stem that used to be eaten. Uncooked corms contain tiny calcium oxalate crystals that give the eater a painful stinging sensation in their mouth. If the corm is cooked, the crystals are destroyed.

The triphyllum in its name refers to Jack’s three-lobed leaves on a single stem. There are usually one or two stems with one three-lobed leaf on each stem.

The many other common names include wild, swamp, dragon and meadow turnip, and, bog onion, brown dragon, devil’s ear, and priest’s pintle.

The entire plant is 1 to 2 feet tall from the soil to the long slender tip on the top of the plant.

The hood or spathe is a trap for pollinating insects. Male plants have a tiny hole in the bottom that attracts insects entering at the top. They are drawn to the light coming from that tiny hole as well as the plant’s pollen. After collecting the pollen the pollinators can exit through that hole.

Female Jack-in-the-Pulpit plants lack that escape so when an insect enters to retrieve the pollen it rarely gets out. After pollination the tiny flowers produce fruits that are loved by caterpillars and birds.

The plant in the photo is in the woods behind our house. It was purchased as a tuber and planted in moist soil. Plant Delights Nursery (www.plantdelights.com) and Prairie Nursery (www.prairienursery.com), offer the plants by mail-order.

You can also start plants from seed in a cold frame this fall. Vermont Wildflower Farm www.vermontwildflowerfarm.com sells seeds. They take five years from seed to flower.

Once you have a successful plant, watch for the flower to fade and the green berries to form.  Harvest the berries before they fall to the ground and are eaten. When summer arrives the entire plant disappears until the next spring.

Most other varieties on the market come from China, the Himalayas and Nepal. Several types are cold hardy in USDA zones 4 to 9. Muskogee is zone 7.

The Jack-in-the Pulpit from Japan, Arisaema sikokianum, is the most exotic in appearance. Plant Delights Nursery gives its common name as Circumcised Japanese Jack-in-the-Pulpit. The pulpit is purple-black on the outside and bright white inside with a large white spadix.

Jack-in-the-Pulpit grows where you would find ferns and Hostas and they thrive in similar shady, well-drained, moist soil. Once they are planted, do not disturb the roots, keep them moist the first year and provide water during periods of drought.

Jack-in-the-Pulpit has no known insect or disease problems.