- October 28, 2015
It's mite season, ladies and gentlemen, and they are causing wide spread itching. There are two types that are causing the most trouble: 1) straw itch mites and 2) oak mites.

Prevent oak mite bites If you see brown and crusty edges on oak tree leaves, be aware that mite activity is possible. Don’t sit under oak trees or on nearby lawns. Illinois Dept of Public Health.

1. Straw itch mites are the topic of this week's entomology pest alert from Oklahoma State Univeristy.. Here's the link -  http://entoplp.okstate.edu/pddl/2015/PA14-43.pdf

"These mites are associated with stored commodities including hay and have been commonly found in wheat straw hay. Recently, a sample of wheat straw hay was submitted to the Plant Disease and Insect Diagnostic Lab at Oklahoma State University and it contained several straw itch mite females that were about to lay hundreds of eggs. Given the warmer temperatures and the identification of these mites in hay, individuals may experience chigger like bites on arms and trunk of their bodies."

Makes me want to scratch just to read about them.

"Symptoms of itch mite bites When individuals are working with hay that is infested with mites they can develop skin irritations from the abdomen to their shoulders. In severe outbreaks the mite bites can occur all over an individual’s body. This mite is a non-burrowing mite and the bite mark is a result of a reaction to the mite’s saliva. A characteristic of the bite are usually presented as a red welt with a central blister and is accompanied with a severe itching sensation. Rubbing or scratching the bite can result in secondary skin infections or dermatitis."

Click over to the link and read the prescription for dealing with mite bites if you handle any hay or straw this season.

2) Then, my plant friend, Jerry Gustafson said in an email that he has been researching oak mites because so many people in Tulsa are being bitten, including him! He says they are "very rampant" and he has been bitten 50 times already in his own garden.

The itch keeps people awake at night, and the irritation can become lumps as large as grapes. In a search for relief he said he's been using Aspercreme with Lidocane from Walgreens and finds it to be effective.

Gustafson pointed out that Spinosad (pet and human safe) is effective for lice, fleas, ticks and spider mites so it may help kill oak mites since all mites should be related.

Deet does not repel mites; mites are transported by wind so they aren't flying toward you. 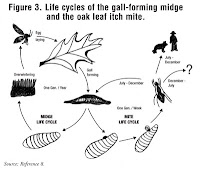 In doing a bit of research I found this tidbit on USPharmacist.com (excerpts)
"During the summer of 2007, hundreds to thousands of Chicago-areaÜ residents went to emergency rooms  were dealing not only with the mysterious bites, but also with the return of swarms of cicadas after a 17-year hiatus.

According to an entomologist and mite expert from the Illinois Natural History Survey, Ed Zaborski, there was a connection between the bites and the return of the cicadas; it is his belief that the bites came from a microscopic itch mite called Pyemotes (pronounced "pie-uh- moat-eez") that is known to cause dermatitis in humans.1 These mites appear to have fed on cicada eggs.1

Similar outbreaks had been reported as far back as 1852, when an itch-mite outbreak associated with sacks of wheat occurred in France.4 More recently, outbreaks were reported in Kansas (2004) and Nebraska (2005) in which pin oak trees were the source of the itch mite known as Pyemotes herfsi.5 In the Kansas and Nebraska outbreaks, the mites fed on midge (a small, two-winged fly) larvae inside galls.6 Galls are irregular growths that appear on plant branches and leaves and commonly occur on pin oak trees. Insects and mites manufacture growth-regulating chemicals that react with plant hormones and produce the galls. These galls provide the mites with nutrients and protection from pesticides and natural enemies.7

If it gives you any satisfaction, mites would rather bite insects since they receive no food from biting us. We are just something to try, biting us accidentally, when they just can get enough nourishment from midge larvae. Source: mitetreatments.com