- September 17, 2012
Reminiscent of my beloved Cat's Whiskers, Bat Flower has whisker bracts that can grow as much as a foot long. 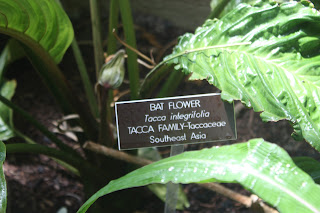 Batflower prefers a humid environment of 70-80% shade, high temperatures, and moisture. A planting mix of something like 50% pine bark, 40% peat and 10% sand supports growth.

"In the wild, T. integrifolia occurs in the understory of rain forests in deep shade, but in a diversity of soil types. The species is most often found growing in accumulations of decayed organic matter. White batflower is remarkably free of pest and disease problems. Snails and slugs are the only pest problems we have encountered."
(http://flrec.ifas.ufl.edu/Hort/New_plants/TACCA.htm) 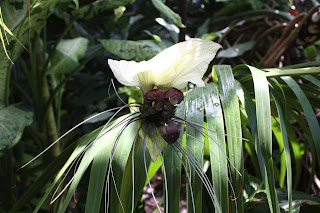 Sow seeds in peat:perlite or vermiculite:perlite and cover 1/8." Place in warm, moist conditions in bright light but no direct sun. They should germinate in 8-12 weeks.
Plant the seedlings out in 2.5-3" pots when the first leaf develops. Give them diluted soluble fertilizer. 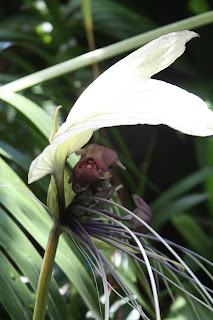 In 2007, Botany Photo of the Day at http://www.botanicalgarden.ubc.ca/potd/2007/07/tacca_integrifolia_1.php
"The resemblance of Tacca to decaying organic matter is cited as evidence that it is attempting to attract flies (sapromyiophily) to facilitate cross-pollination. Some traits associated with sapromyiophily include dark flowers and bracts, filiform appendages, trapping mechanisms and the absence of nectar – all traits that are possessed by Tacca species (Tacca integrifolia is also reported to have a musty smell). However, one study has found that Tacca species are primarily self-fertilizing and have no great need for pollinators. The as-yet unanswered question surrounding the elaborate flowers is discussed at the end of the linked article."

I found seeds for Tacca integrifolia on EBay, at summerhillseeds.com and several other vendors.

I took the photos in Washington D.C. Exceptional plant isn't it?

Just now the Myriad Botanical Garden in Oklahoma City posted a photo of a Bat Flower blooming there! Here's the link -
http://www.facebook.com/#!/MyriadGardens