- June 24, 2012
Lilium lancifolium is one of the lilies with the common name "ditch lily" because it grows so well in damp places around the country.

But guess what? They are actually native to eastern Guam, China, Korea and Japan. It was first shipped to Europe in 1870, according to Phagat's Garden.

The unscented flowers bloom on top of 5-foot tall stems and the seeds form along the stem where each leaf emerges. The pollinated seeds become plants in 2 years.

The bulbs grow their roots during the winter so the bulbs are planted no later in the season than the fall. 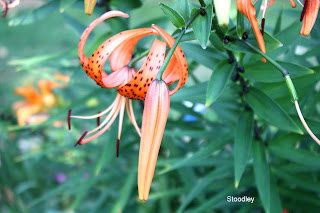 According to the Pacific Bulb Society, "The Tiger Lily has a reputation as the "Typhoid Mary" of the lily world, being very resistant to disease and virus tolerant which equals a risk to other lilies."


Tiger Lily bulbs are said to taste like potatoes or turnips when boiled though I've never tried them as a food.

There is quite a bit of confusion about the genetics, names and identification of Turk's Cap lilies. But if you love a really tall plant with outrageous flowers, having a few of these will make you very happy for the month they are in bloom.
Lilium lancifolium Lilium superbum Lilium tigrinum Pacific Bulb Society Tiger Lily Turks Cap Lily

Unknown said…
You've actually confused two different lilies. Lilium lancifolium is not the same species as Lilium superbum. Lilium lancifolium is not native; Lilium superbum is. See Gray's Manual of Botany, Gleason and Cronquist, or any authoritative botany manual. The non-native has black bulblets that form in the axils of the leaves; the native does not. The non-native is ubiquitous and in places is invasive. The native, otoh, is disappearing in many places and even rare in places.
May 17, 2014 at 8:26 AM

Molly Day said…
Hi! Thanks for your comments. It's helpful to everyone when someone knowledgeable helps out us gardeners!
May 17, 2014 at 8:39 AM