- May 15, 2019
Spiderwort flowers bloom for weeks at the base of deciduous tree trunks and shrubs, tucked among their roots. Each individual flower lasts only a day but there are several waves of little three-petaled flowers that keep the show going. 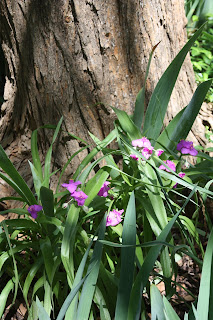 The most common Spiderwort is the American native Tradescantia virginiana or Woodland Spiderwort with blue and lavender-blue flowers.  Tradescantia ernestaniana, Ernest’s spiderwort, or Red Cloud is native to OK, AL, AR, MO and MS.

Spiderworts are hardy from zones 5 to 9, with flower colors from rose-red to blue and deep purple. They share the same plant family, Commelinaceae, with 731 other so-called perennial dayflowers that originated in Canada and the tropics from the West Indies to Argentina.

Other Tradescantias with three-cornered flowers include Purple Heart, Tradescantia pallida and Wandering Jew, Tradescantia tricolor, often grown under trees as an annual groundcover.

Spiderworts are easy to grow in average, moist to wet, well-drained soil in part to full-shade in zone 7. In colder zones they can be grown in full-sun. We let ours grow without much attention but pruning the spent flower clusters will prolong the bloom period.

The flowers bloom in umbels (clusters) on top of stiff stems. At the end of flowering, you can cut the stems down  for  a more tidy appearance and just in case the weather allows for a second bloom in the fall.

Spiderwort can be planted in containers to prevent spreading and clumps can be divided spring or fall. If they are allowed to make seeds, the resulting small plants are easily transplanted or shared. Twenty years ago we had one cluster of blue-flowered spiderwort and now there are 10 scattered among the trees and along a fence.

Sometimes used medicinally and scientifically, spiderworts are not bothered by disease or insect damage. The leaves are eaten cooked and raw; the flowers are used as edible garnish.