Sustainable Worm Healthy Soil = No Till or Low Till

- July 10, 2017
Jo Craven McGinty wrote a worm-affirming article for the Wall Street Journal that was published in the July1-2 2017 weekend edition. Here's a link to the entire article.

Worms turn 8,000 pounds of earth on an acre of land in two weeks, according to McGinty. The worm tunnels aerate the soil and the castings (poop) fertilize the ground it squirms in. Darwin called worms nature's plows.

It can take up to ten years to repair the damage done to soil by conventional plowing.

Now 34% of US cropland uses no-till farming according to the USDA. Additional benefits include using less fuel and fewer soil improvements.

Did you know that when summer heats up worms move 18-inches down into the soil to protect themselves from the heat? Here's an interesting Purdue U. article about worms. 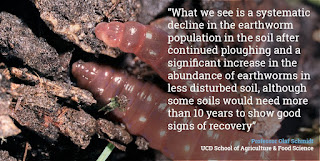 The University College Dublin conducted similar research and reported similar findings in May, 2017. “What we see is a systematic decline in the earthworm population in the soil after continued ploughing and a significant increase in the abundance of earthworms in less disturbed soil,although some soils would need more than 10 years to show good signs of recovery” says Associate Professor Olaf Schmidt, from the UCD School of Agriculture and Food Science, University College Dublin.