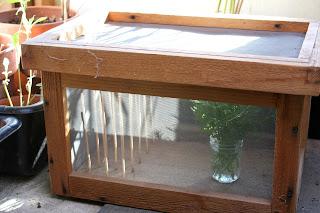 The day before the freeze, I harvested all the figs, snow peas, lettuce and kale that was ready. Then, I started collecting some fennel and dill in case it didn't survive.

Hanging out on the dill I found a Black Swallowtail caterpillar. It is first instar, too tiny to survive 24 degree night. That's what I assumed, anyway.

So, out came our handy butterfly box to the rescue. It was made by someone in OK but I can't recall who it was. He said it was the last one he had and that he wouldn't be making them anymore. And, that was 5 years ago.

It's really well constructed and has held numerous caterpillars over the years.

The tiny black dot in the middle-right is the caterpillar on a jar full of dill. The garden shed is heated and its in the sun so everything should go well until night time temperatures rise enough to put it back outside in the dill patch.

As of this morning the lettuce, kale, fennel and dill all look like they survived the freeze quite nicely.